Employee Of The Month 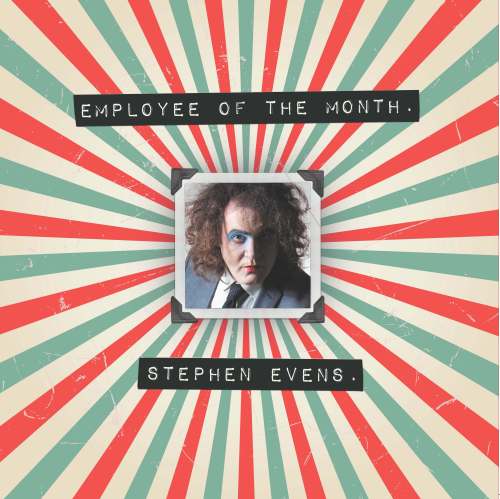 ‘A post-punk bovver-boy groove, heavy bass, and shrewdly astute lyrics. Stephen very kindly told us about how the song came to be,’ Harmonic Distortion

‘…packed with all the left-tilting wonk, charm and fuzz that you can expect from anything EvEns puts out!’ Raw Meat

Album: Employee of The Month

Employee of The Month is packed full of candour as post-punk, indie-pop troubadour Stephen EvEns unleashes his alter-ego. This beatnik, indie-punk escapade is accompanied with swooping motoric guitars, squelching effects and crackling sounds that fluctuate from the exotic, improvisational to a deadpan realism. EvEns muses on the futility and injustice of the world, all delivered with a huge wry smile and a glamorous, magical and eccentric delivery.

The album kicks-off with the single Dustbin Man focusing on key workers and the people that knit society together, with booming oscillating guitars and a post-punk disjointedness. Push Yr. Thumb builds on a massive wave of distortion, as the pendulum swings to a passionate accompaniment of off-kilter violins in this post-punk dystopian trajedy. Freak Show guests William D. Drake on piano and accentuates EvEns cabaret style as he re-collects a tale of migration to the city. The vocals fill with a melancholic timbre in a dramatic search for a positive future.

Jon Snow shares vocals with Caroline Gilchrist (Hot Sauce Pony) echoing the sound of Fun Boy Three. A sliding, sludgy drumbeat, as vocals express caution, ‘somethings lurking in the water, but you still look to the sky.’ I Hate Shop re-collects life with a major high street retailer – a glamorous critique – crashing, roaring sounds break the bleak banality of shop life. The Crystal Palace cries, ‘come and get me and take me home,’ is a beautifully crafted piece, delicate and moving.

Multi-instrumentalist and talented artist in his own right Stephen EvEns tours with his own guitar and full band line-up, or occasional casio-tone. In his alter-ego EvEns plans to even the score, reflecting on illustrations of modern day life. Employee of The Month dissembles society and takes a strong harsh look at it, as he puts it back together again. He plays The Brunswick in Brighton, Friday July 31.